Solomon is the pit bull belonging to the Alexander city employee who butt dialed me in the audio on this page. While I was actually at his property reporting Solomon's situation to the Alexander police department, Solomon's owner came home and confronted me. The police department thought it was appropriate to notify him that I was at his trailer and reporting the lack of shelter his was providing for his dog.

GRAPHIC! Yes this is a dead dog on a chain in Faulkner County, AR. Arkansas Animal Alliance's President has filed a police report and hope justice will be served. With no local animal shelter, residents don't worry about felony dog abuse because the sheriff's office has no place to take a dog if seized. 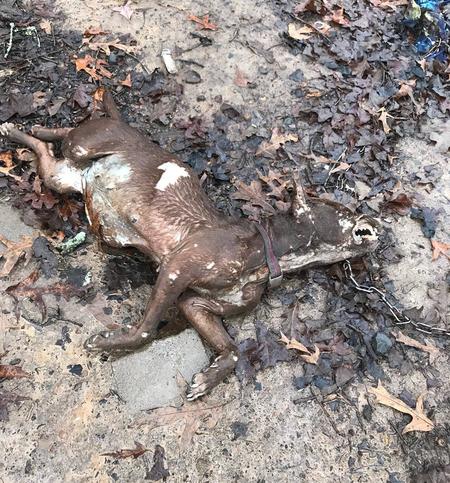 The audio is from a butt dial I received from an Alexander, AR city employee. When he butt dialed me, it went to my voicemail. I took this recording to the Alexander Police Chief whose main concern seemed to be why the city employee had my phone number to begin with even though I had already attempted to explain how I met him due to trying to help him with his pit bull he was neglecting.

Even though our local authorities often do nothing regarding animal neglect/abuse, we must continue to be their voice. We need to unify and demand change! .

CITY OF ALEXANDER, ARKANSAS.....
ASHAMED? YOU WOULD THINK.

FIGHT FOR WHAT'S RIGHT! Don't support a rescue group without first doing your research. The animals are helpless and voiceless. Check out the rescues who continue to support the questionable ones and question them too!

Saline County Arkansas Dog: Beaten, Shot, and Left in the Trash. What is wrong with people?

What are your thoughts about donors and other rescues still